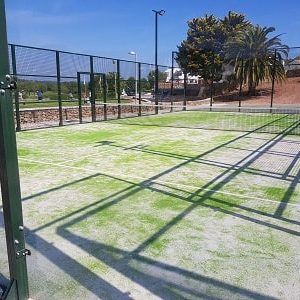 With the arrival of summer, it has become even more fashionable to play paddle tennis. In Spain, more and more people are attracted to this sport, which originated on Acapulco’s famous beaches at the end of the sixties, capturing tourists’ enthusiasm for what quickly spread to other countries at an international level, until today.

Paddle is a sport played with a solid paddle, a less precise spherical paddle, and on smaller courts than its predecessor, which has become the main attraction of this activity. In this sense, Extremadura has not resisted its charm, as more and more hotels, campsites, sports centers, communities, and even individuals continue to grow and use the services of SportBS for the installation and maintenance of padel courts in Caceres.

Tennis has remained inserted in the collective imagination as a sport of the elite. Thanks to our competitive prices, we have built many paddle tennis courts and sports facilities in Cáceres. Therefore, some would think that paddle tennis is similar to this characteristic, but they could not be more wrong. Paddle tennis courts’ constructions are more accessible and are not limited to selecting groups of exclusive clubs.

From its roots Paddle was designed so that padel courts could be installed almost anywhere, from rooftops of buildings to urban alleys. For this reason, they have become an affordable recreational alternative for city dwellers, whether in sports centers, public courts, neighborhood associations, hotels and, campsites, or private grounds.

Whether natural or artificial, the paddle tennis court’s maintenance, is required to avoid the proliferation of fungus due to humidity. This is a representative example of the need for constant maintenance, if it is not carried out promptly, the grass can be lost, which entails replanting it or replacing the carpeting if it is artificial, increasing costs exponentially.

The most frequent paddle tennis modality is double, being the most known by most people not linked to the discipline, but for space reasons have become popular in cities like Caceres, the individual paddle courts, which are adapted to the dynamics.

The manufacture of individual paddle tennis courts has had an essential presence in the clubs and recreational sites of Cáceres, which have been placing them as a new attraction, especially for the youngest, who intensely want to have a healthy distraction.

Individual paddle tennis courts are versatile, easy to set up and relatively low cost for court installation, and maintenance. Besides, they are very popular with a growing group of Spanish people who love and practice this sport.

A recurring argument made by those who avoid team sports is, the difficulty arranging a convenient schedule for all members, both for practices and competitions, individual; paddle tennis makes these problems no longer exist.

Players can organize their time conveniently and use it in their free time, without a fixed schedule. In this respect, individual paddle tennis courts have proved extremely convenient for those who yearn for distraction and some physical and mental exercise but work rotating shifts or have family responsibilities.

Installation of Padel Roofs in Cáceres 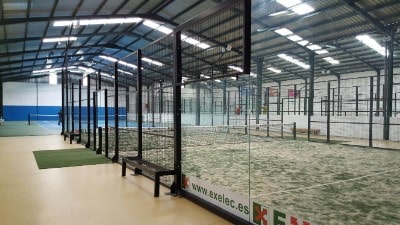 One disadvantage of outdoor sport on conventional courts is the inconvenience of using them because of the high maintenance costs or the impossibility of doing so during the winter or when it rains; however, the advantages of indoor paddle tennis courts are immense.

The indoor paddle tennis courts are an innovation compared to regular tennis. Paddle is a sport designed for relatively small spaces, however, the possibility of installing indoor padel courts,  air-conditioned courts or glass courts, is the current trend towards ensuring that you can enjoy yourself during the winter or in the face of winter weather.

The glass-covered paddle tennis courts are prevalent in recreational centers that promote paddle tennis competitions as they allow you to appreciate the incidents of the match without worrying about potential accidents with the ball and the spectators, as in paddle tennis, the ball is less precise than in tennis.

Another advantage of indoor paddle tennis courts is that they give a distinguished touch to the tournaments, i.e., apart from the potential gains, the matches are a spectacle in themselves, attracting many captivated people by the dynamism of the game and its accessibility to non-professionals.

For all the above reasons, significant Spanish population sectors have accepted indoor paddle tennis courts both for those who wish to practice it during the winter and live in cold regions, and for those who prefer them to protect themselves from the harmful rays of the sun. It is a sport that can be practiced in any season of the year.

For this reason, paddle tennis has positioned itself as an extremely versatile entertainment activity, which can be adapted to practice in both outdoor and indoor areas, thus attracting more and more followers throughout Spain daily.

Likewise, indoor paddle tennis courts are incredibly comfortable as they are potentially adaptable to air-conditioned environments, both in winter because of the low temperatures and in summer, when the heat is stifling. At both extremes, las , indoor paddle tennis courts provide a comfortable option for practicing an entertaining and healthy sport.

The best paddle tennis courts at the best price

Request a quote from our company. No obligation!